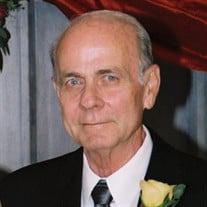 **Due to the current COVID-19 situation, visitation will be private for family only. Private services for family will also be held, and a link will be posted for additional family and friends to watch via live stream. Our family would like to thank you for understanding, and we will let you know when the live stream can be accessed. Orel Dale Etchieson age 77, of Red Oak, Texas was born on June 14, 1942 in Sulphur, OK. He left this world peacefully on March 14, 2020 surrounded by his wife, children, and grandchildren. Dale was preceded in death by his parents Orel Desmond Etchieson and Sarah Adeline Norris, as well as his sister Wanda, and brothers Marshall and Robert. Dale is survived by his wife of nearly 45 years Charlotte Elaine, daughters Michelle, Debbie, Karen, daughter Charlotte and her husband David, his son Dale Jr., his twelve grandchildren Chris, Matt, Cassidy, Lindsay, Shelby, Kayla, Nick, Danielle, Hudson, Landon, Chloe, and Phoebe, and the family of Roger & Lawanda West and their daughter Latisha Strickland, who were family by choice. Dale learned early in life how to be tougher than what it had to throw at him, and that’s what kept him going strong and living a full and amazing life despite a myriad of health challenges spanning through various stages in his life. His first knock-down came at age 6 when he was diagnosed with Polio. Two days after contracting first symptoms, he was paralyzed. Through the help of the Shriners he was treated and recovered, and came back ready to give life all he had! He was involved in every extra-curricular activity he could be, excelled at high school football, sang choir, and even included the experience of being a high school cheerleader! All of the entire whitespace in his 8th grade yearbook is filled with sentiments from friends and sweethearts alike, complimenting him on his good traits. Dale rounded up his academics early, obtaining his GED before completing 11th grade so that he could serve his country. He joined the U.S. Army on August 17, 1959 where he served as a Postal Clerk, received a Good Conduct Medal, and was honorably discharged on July 30, 1962. On August 14th, 1962 Dale married his first wife, Glenda McCall, who also happened to be a sweetheart from his aforementioned yearbook. From this marriage was born his first daughter, Michelle. On April 8th, 1975, Dale married Charlotte Burr, who brought to their union two wonderful step-daughters Debbie and Karen, who he raised and loved as his own flesh and blood. Also from this marriage was born their daughter Charlotte, and son Dale Jr. Dale was a loving family man through and through. Tough at times and tender at others, he worked endlessly, saving and sacrificing so that he could provide the best life possible for his family, no matter what. His enjoyment for life and his family emanated from his smile at holiday gatherings, on family vacations, and even just at the dinner table or sitting on the bench in his front yard watching the sunset with his wife. Dale supported his family that he loved so much through his 25 year tenure at Sears where he may very well have sold a refrigerator to an Eskimo! Post retirement, he became a long-time fixture at K Auto Parts, where he made many friends, laughs, smiles, and memories. When he wasn’t hanging around the parts house or continuing to provide support and wisdom to his adult children, he returned to travelling the country with his wife, enjoying many of the country’s sights and trying every new slot machine that caught his eye. To hear him tell you about the latest slot machine that he played and all about how to play it, was like hearing an excited child tell you all about the latest video game that just came out! Dale always loved good country and western music and a nice pair of boots (and a cold beer here and there back when he could). If he ran out of country to listen to or sing as he went about his day, he had many familiar whistles or his own little made up ditties that you would hear in between smiles. Though he had to leave us way too soon, he left us with the very best of him in our hearts, and in our memories. Those close to him have lives that are richer just for having had Dale in it.

**Due to the current COVID-19 situation, visitation will be private for family only. Private services for family will also be held, and a link will be posted for additional family and friends to watch via live stream. Our family would like to... View Obituary & Service Information

The family of Orel Dale Etchieson created this Life Tributes page to make it easy to share your memories.

**Due to the current COVID-19 situation, visitation will be private...

Send flowers to the Etchieson family.