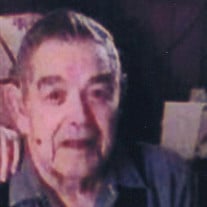 Orvel Earnest Casey of Lancaster, Texas was born March 25, 1924 in Illinois to Carson and Carrie Casey. He passed from this life on December 26, 2016. He was preceded in death by parents; first wife Eva Jean Casey; grandson Gerald Casey, Jr;... View Obituary & Service Information

The family of Orvel Earnest Casey created this Life Tributes page to make it easy to share your memories.

Send flowers to the Casey family.