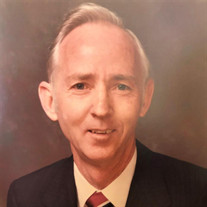 **Due to the current COVID-19 situation, visitation will be private for family only. A private graveside service will be held. Our family would like to thank you for understanding, and we will let you know when the public Celebration of Ray's Life will be held. Rayford (Ray) Wilson Hulshouser was born October 26, 1929 in Cedar Hill, Texas to Archie Alvin and Dosie Katherine Bosher Hulshouser, and he passed from this life on March 14, 2020 in Dallas, Texas at the age of 90. He was preceded in death by his beloved son, Michael Ray Hulshouser who they joyfully welcomed into their home in 1960; his parents, Archie and Dosie; his sisters, Thelma Rhea Fouts and husband T. C. Fouts, Mildred Irene Turner and husband Jack Bruce Turner. Ray is survived by his beloved wife, Virginia Milner Hulshouser of Lancaster, Texas; daughter in law, Marcy Nitsche; grandchildren, Whitney Hulshouser Newton and husband Chris, Michael Delaney Hulshouser and wife Maria; great-grandchildren, Megan Rhea Newton and Lorelai Michelle Hulshouser; brothers, Wayne Hulshouser, Glenn Hulshouser and wife Sharon; sister, Norma White and husband Pete; and many nieces, nephews, other family members and friends that he loved. In 1952, Ray married Virginia Milner at the First Christian Church of Duncanville, Texas. She was the love of his life for 67 years. They then moved to Lancaster, Texas. He began his banking career at Oak Cliff Bank at the age of 18 and received a Banking Degree from the Southwestern School of Banking at Southern Methodist University. He continued his career at the First National Bank of Lancaster where he served as President and a member of the Board of Directors until he retired in 1992. While there, Ray accomplished many goals and milestones for the Bank and the City of Lancaster. He was named Man of the Year for Lancaster, Texas. Mr. Hulshouser also served on the Board for the Wheatland Cemetery Association as the Accountant and handled many other duties. Mr. Hulshouser was loved by all that knew him, and he loved all of them in return. In lieu of flowers, memorials may be made in Ray’s honor to the First Christian Church of Duncanville, TX. A memorial service for family and friends will be scheduled at a later date.

**Due to the current COVID-19 situation, visitation will be private for family only. A private graveside service will be held. Our family would like to thank you for understanding, and we will let you know when the public Celebration of Ray's... View Obituary & Service Information

The family of Rayford Wilson Hulshouser created this Life Tributes page to make it easy to share your memories.

**Due to the current COVID-19 situation, visitation will be private...

Send flowers to the Hulshouser family.