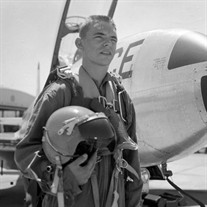 Rex Buxton Head (January 23,1935-March 18, 2022), 87 of Lancaster, Texas. Rex was born and spent the first twelve years of his life in Alexandria, Louisiana. In 1947, his family moved back to Lancaster which had been home to the Head family since the early 1830’s. Rex graduated from Lancaster High School in 1953 and as a member of the ROTC, graduated from Texas Christian University in 1957. He was a die-hard Horned Frog. Upon graduation, he entered the United States Air Force, graduating from pilot training in 1959, and thereafter, began a career in aviation that would take him and his family all over the world. A veteran of the Vietnam War, Rex was honorably discharged from the Air Force in 1967 with the rank of Major and thereafter, served in the Air National Guard until his retirement. He began his civilian career with Braniff International Airways, flying for them as a Captain until the company’s bankruptcy in 1982. Rex flew a number of different aircraft for Braniff, most notably as one of only fourteen of its pilots to fly the Concorde. Thereafter, Rex flew for Piedmont Airlines and then US Airways until he retired in 1995. Throughout his life, Rex was an avid outdoorsman and enjoyed fishing, hunting, and raising Beefmaster cattle. There were not many creeks or tanks in the Lancaster area that he had not fished or explored. Around the age of five, while visiting his grandparents, he walked a half mile alone, without permission, down to Ten Mile Creek to fish. A Boy Scout troop found him fishing and marched him back to his grandparents’ house. Once the Scouts had released him to his mother’s custody, Rex explained to his mom that he was just fishing and said he needed to go back and get his fishing pole. Somehow, he managed to beat the Scout troop back to the creek and was waiting for them when they arrived. His passion for the outdoors led to numerous hunting and fishing trips across the globe which he continued into his early 80’s with his son and grandsons, as well as a small army of friends and family. Rex was an active member of the First Christian Church (Disciples of Christ) of Lancaster which was founded by his ancestors. He served on multiple committees, on the Board, as a deacon and as an elder of the church throughout his adult life. The most important passion in Rex’s life, however, was the love of his life, Rowena F. Dickey, whom he married in July of 1953. Rex and Rowena were blessed with almost 70 years of marriage, traveling extensively, including living for a time in Europe. He enjoyed a life of fun-filled times with family and friends, many of whom they hosted at “Head’s Farm” at least monthly for holidays, birthday celebrations, and pool parties or at their place in Hawaii. Together, they provided their children and grandchildren the best example of love and generosity. Rex’s laughter and love will be missed by all who knew him. Rex was preceded in death by his parents, Raymond M. Head and Pauline B. Head, and sister, Margaret S. Bate. He is survived by his beloved wife, Rowena Head; son, Cliff Head (James Wagner), daughter, Julie Quaid (Chuck), daughter Lisa Connell (Jason Miller); six grandchildren, Chris Farish (Erin), Ryan Connell (Tina Marie), Matt Connell (Vanessa), Alex Quaid, Eric Connell (Erica), Lauren Connell (Shelby Hill); and six great-grandchildren, Jenna Connell, Nathan Connell, Carson Farish, Calvin Connell, Claire Connell and Mia Connell as well as many nieces, nephews and cousins. He is also survived by his dogs, Pupee’ and Jilly. A celebration of Rex's life will be at 3:00pm on Friday, March 25, 2022 at Byrum Funeral Home Chapel.

Rex Buxton Head (January 23,1935-March 18, 2022), 87 of Lancaster, Texas. Rex was born and spent the first twelve years of his life in Alexandria, Louisiana. In 1947, his family moved back to Lancaster which had been home to the Head family... View Obituary & Service Information

The family of Rex Buxton Head created this Life Tributes page to make it easy to share your memories.

Send flowers to the Head family.