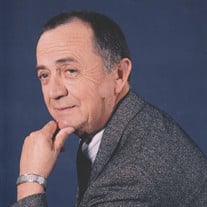 Richard “Dick” Jennings of Lancaster, Texas was a registered Chickasaw Indian born in Canadian, Oklahoma on July 2, 1930 to Robert Jackson Jennings and Carrie Virginia Goodwyn Jennings. He left this life and went to be with his Lord on September 20, 2018 in Austin, Texas. Dick was survived by his wife, Sue; son Kent and wife Karen; granddaughters Brooke Marston and her husband Brian and Ebby Isbill and her husband Brent; greatgrandchildren Micah Marston, Matt Marston, Mia Marston, Mae Marston, Eli Isbill, McKenzie Isbill, and Isaiah Isbill. He was preceded in death by his parents as well as older brothers, Robert Jackson Jennings, Jr. and Harold Royce Jennings. He is survived by four sisters Mary Jesseph, Carol Ann Shabbot, Susan Wyche, and Shirley McLain along with many loving nieces, nephews, and in-laws. Dick Jennings married Sue White on September 22, 1950 in Oklahoma City and welcomed their only son, Richard Kent, into the world in 1954 while serving in the army at the Pentagon from 1953-1955. After his military responsibility was completed, he enjoyed a long career as an accountant and treasurer for the Continental Trailways bus company in Dallas. In 1966 he moved from Dallas to Lancaster where he resided for over fifty years. His second career was a vocational counselor at Lancaster High School where he retired in 2005. Dick loved his wife and family and his relationship with them was his priority. His active relationship with Jesus Christ was evident in his passion to serve his Lord through his local church. Dick and Sue were active members of First Baptist Church Lancaster for over fifty years. He served as a faithful deacon to those in the church. He loved Southern gospel music and was a member of the First Baptist Church Senior choir for many years. His quick smile and easy laugh along with his sharp mind made him a perfect candidate for his greeting post in the church foyer each Sunday. He made people feel welcome. In his later months after moving to Austin, Dick quickly made many new friends in the Buckner Villa independent living facility. He was cheerful, friendly, loving, interested in others, and a willing listener. One fellow resident said of him, “He’s just so jolly.” Dick Jennings will be missed by many on earth but has been welcomed by a host in heaven.

Richard &#8220;Dick&#8221; Jennings of Lancaster, Texas was a registered Chickasaw Indian born in Canadian, Oklahoma on July 2, 1930 to Robert Jackson Jennings and Carrie Virginia Goodwyn Jennings. He left this life and went to be with his... View Obituary & Service Information

The family of Richard "Dick" Jennings created this Life Tributes page to make it easy to share your memories.

Richard “Dick” Jennings of Lancaster, Texas was a registered...

Send flowers to the Jennings family.