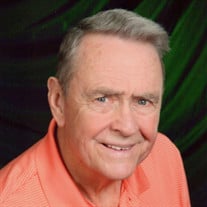 An incomparable husband, father, grandfather, great grandfather and friend, Bob Briggs was a man whose character was illustrated through his kindness, integrity, sense of humor, honor, love of God and family. Robert Darwin Briggs was born to Virginia and Billy Leslie Briggs in Big Spring, Texas on January 17, 1939. Bob left this world entering his heavenly home on November 24, 2021. After the passing of his father, six-year-old Bob and his mother lived in the Dallas and Lancaster area. Graduating from South Oak Cliff High School, Bob then attended University of Texas in Arlington. Bob served in the U.S. Army. He was a gifted salesman working in the retail business, later forming his distribution company, C&E located in Lancaster, Texas. After retiring, Bob embarked on a new career with The Four Seasons Resort and Club in Irving, working in the Byron Nelson Golf Club and Security. In 1991, Bob married his soul mate and partner, Tricia. They loved and enjoyed each other's company sharing many happy times. Bob loved God and his family. He was a strong Christian man and a member of Northside Baptist Church, Corsicana. Bob spent quality time with his family. Many fun adventures with the grandchildren were shared. The love and sweetness of the great-grandchildren during the last few years brought joy that enriched his life. Bob was an avid golfer, enjoying the game with his golfing buddies and family over the years. He was so proud of his Hole-In-One in '96 and conquering "The Ravine." From the black tee, "The Ravine" was over 100 feet deep, a canyon with a minimum carry of 240 yards on the Championship Course at the Four Seasons Resort in Nevis, West Indies. In the year 1990, Bob's ''Nifty Fifty" softball team competed in the Senior World Series in Scottsdale Arizona. Numerous years he supported and served on the board of directors for Summit Ministries in Colorado Springs. Bob was a modest man; his wife did the boasting on his accomplishments. Bob was proceeded in death by his parents. Late wife, Janis Burton, mother of his three surviving children, Kelly Henderson, Robert G. Briggs and wife, Paula, Bradley Briggs and wife Cindy. Left behind to cherish his memory is his loving wife of over 30 years, Patricia Briggs; her daughter, Shelly Hall Moran and husband, Lucky Louque; his adopted son, Michael Williams; his daughter, Kimberly Vidrine; his grandchildren, Jacey Grider and husband Matt, Jordan Southerland and husband James, Marcey Posada and husband Paco, Chase Henderson and wife Chelsea, Adam Briggs, Brittany Briggs, Meagan Henderson and Rachel Briggs, Jeff Briggs, Taylor and Kolby Vidrine; his great-grandchildren, Caroline, Abigail, Matthew and Madeleine Grider, Sophia and Elise Southerland, Clark and Kendal Henderson; and his brothers, Michael Eshleman and Danny Eshleman. Family will receive friends from 5:00pm to 7:00pm on Monday, November 29, 2021 at Byrum Funeral Home Chapel. Funeral service will be at 10:00am on Tuesday, November 30, 2021 also at Byrum Chapel. Memorials may be made to the Corsicana Salvation Army in Bob’s name.

An incomparable husband, father, grandfather, great grandfather and friend, Bob Briggs was a man whose character was illustrated through his kindness, integrity, sense of humor, honor, love of God and family. Robert Darwin Briggs was born to... View Obituary & Service Information

The family of Robert Darwin Briggs created this Life Tributes page to make it easy to share your memories.

Send flowers to the Briggs family.