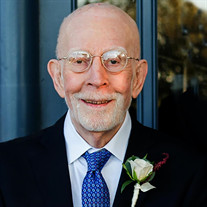 Robert Ross Miller, born August 10th, 1932 in Breckenridge, Texas, passed away November 9th, 2020 in Dallas, Texas, at the age of 88, surrounded by his family. Bob was the oldest of the six children of Owen and Margaret Miller. At a young age he moved to Longview, Texas, where he was raised and attended high school. He then embarked on an eight year stint in the United States Navy, which took him from basic training in San Diego, California, to a two year assignment on Kodiak Island, Alaska, where he was the assistant to the Base Commander. As a reward for his fine work, the commander issued Bob new orders: a three year assignment in Paris, France. During his time in Paris, Bob fell in love with all things French. He had joined the Navy not only to serve his country, but to see the world. His three years overseas made a lasting impression. He completed his time in the Navy by working for two years at the Pentagon in Washington, D.C. Following his honorable discharge from the Navy, Bob began a 35-year career as an executive in the insurance business, which took him to Amarillo, Dallas, New Orleans, Oklahoma City, Denver, and finally, Galveston, where he retired in 1997. It was in Amarillo in late 1964 where he met the love of his life, Josephine Hellman. The two were married in February of 1965, and ten months later had a son, Craig. Two years later, in New Orleans, they welcomed a daughter, Claire. Bob and Jodi were married almost 40 years, until Jodi passed in September of 2004. They were able to spend their final 15 years together on the Texas coast in Galveston, which was their heaven- on-earth. Daily walks on the beach, breathing in “the healthy salt air,” and enjoying time with friends made for one of the happiest chapters of their life. During this time they also traveled to Paris, where Bob served as a tour guide for Jodi. Even though it had been four decades since he had lived there, it was as if he had committed the entire city to memory. He was in his element. Bob was a devout Roman Catholic. While in Oklahoma City, he and Jodi volunteered to sponsor a refugee family from Laos, which was one of the most rewarding experiences of his life. In addition to his family, the other love of his life was gardening. Bob had the greenest of thumbs. His yards and gardens were always immaculate and beautiful. He could grow anything, anywhere. Bob was also a true raconteur, possessing a deep catalogue of long, colorful stories for any occasion. He had a keen mind, loved to talk about world affairs, was a voracious reader, and did his daily crossword puzzles religiously. He was also incredibly thoughtful — even up until his passing, he continued to handwrite letters, cards, and thank you notes to loved ones. In his 60s, Bob discovered yet another passion: hiking the rugged landscape of the western United States. With his dear friend Steve Schnack, he made many trips to National Parks like Big Bend, Guadalupe, Carlsbad, and Zion, for hiking and camping expeditions. Bob spent his final years at Jackson Independent Living at Juliette Fowler Communities in Dallas. He and his family always appreciated the wonderful staff and residents who made his final years so enjoyable. And, to nobody’s surprise, his vegetable garden at Fowler was always perfect and bountiful. Bob is survived by his son, Craig Miller, and daughter-in-law, Natalie; his daughter, Claire Colombo, and son-in-law, Kennedy; his soulmate and grandson, Gabriel Colombo, and his beloved granddaughter, Greta Colombo; his brother, John Miller, and sister-in-law, Billie Ann, his sisters Nancy Miller, Linda Teague, Patricia Sudduth, and Mary Archer, and brothers-in-law, Ron Archer and Ted Hellman. Donations in Bob Miller’s honor may be made to the Dallas Arboretum or the American Heart Association. His nephew, Tony Archer, once described Bob as a “peace-loving man,” which fit perfectly. Bob was a gentle, thoughtful, caring soul. May he rest in the peace he loved.

Robert Ross Miller, born August 10th, 1932 in Breckenridge, Texas, passed away November 9th, 2020 in Dallas, Texas, at the age of 88, surrounded by his family. Bob was the oldest of the six children of Owen and Margaret Miller. At a young age... View Obituary & Service Information

The family of Robert Ross Miller created this Life Tributes page to make it easy to share your memories.

Send flowers to the Miller family.