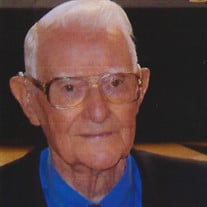 In lieu of flowers, Valton's family requests memorials be made to the charity of your choice. Romus Valton Burgin of Lancaster, Texas was born August 13, 1922, in Marquez, Texas to Joseph Harmon and Beulah Mae (Perry) Burgin. He passed from this life on April 6, 2019, at the age of 96. Valton (R.V.) was preceded in death by wife, Florence Riseley Burgin, brother, Joseph Delton (J.D.) who was killed in France during WWII, sisters Lois Williams and husband Ories, and Ila Minkler and husband Homer and brother-in-law, Felix Freeman. He is survived by daughters Margaret Ann (Maggie) Shepherd and husband David. Vicki Lynn Burgin, Vanessa Frier and husband Walt and Terrie Lee Burgin; grandchildren Kyle Shepherd and wife Janna, Paige Salinas and husband Greg, Todd Grubbs and wife Mary Neal and Ian Grubbs and partner Kelty; great grandchildren Cody, Wyatt, Abel, Mya and Ashton; sister Imogene Freeman, brothers William Edgar Burgin and Robert (Bob) Burgin and wife Tillie; brother-in-law Les Riseley and wife Lyn. He is also survived by his many nieces, nephews as well as great nieces and nephews. Valton graduated from Jewett High School where he was Captain of the football team and lettered all four years. He loved hunting and fishing, it was a passion of his from a young age and continued all of his life. He worked as a stationery salesman in the US Midwest after high school He joined the USMC on November 13, 1943, and was assigned to the 9th replacement battalion and soon became a mortar man in K Company, 3rd Battalion, 5th Marines (K-3-5), 1st Marine Division and fought in the Pacific theater at Cape Gloucester, on Peleliu for 30 days and Okinawa where he was promoted to Sergeant. Valton was awarded the Bronze Star on May 2, 1945, which he received for destroying a Japanese machine gun emplacement that had his company pinned down. He was wounded on May 20, 1945, and spent 20 days in the field hospital (he was awarded the Purple Heart) before rejoining K-3-5 for the remainder of the battle. He was also going to be awarded the Silver Star by Captain Haldane (AckAck) for taking out a pill box on Peleliu, but Haldane was killed by sniper fire before he was able to submit the paperwork. Valton left Okinawa on October 16, 1945, on the USS Lavaca which took about 3 weeks to reach the Golden Gate Bridge in San Francisco and then on to San Diego where he spent a month before being processed back to civilian Life. He lived with his sister, Ila, and got a job at the Ford Plant in East Dallas where he worked until he got a job with the Post Office on May 15, 1946, making $.84 an hour. He worked his way up to supervisor and stayed there until the day he retired on August 13, 1977. Before going to the battle of Cape Gloucester, he was assigned to training camp at Camp Balcombe near Melbourne, Australia where he met his beautiful wife, Florence, while on leave. They were married in Dallas, Texas on January 29, 1947, and had 4 beautiful daughters...Margaret Ann, Vicki Lynn, Vanessa Jo and Terrie Lee. Valton (R.V.) is the author of the memoir Islands of the Damned and is portrayed in the HOB series “The Pacific”.He enjoyed traveling in his retirement years. He had the privilege of going to Okinawa and Peleliu to help heal his heart from the war. After 2010, he also had the privilege of being a guest speaker at military balls, meetings and different events. He wanted the story of WWII Marines to be told to future generations so they would not forget.

In lieu of flowers, Valton's family requests memorials be made to the charity of your choice. Romus Valton Burgin of Lancaster, Texas was born August 13, 1922, in Marquez, Texas to Joseph Harmon and Beulah Mae (Perry) Burgin. He passed from... View Obituary & Service Information

The family of Romus Valton Burgin created this Life Tributes page to make it easy to share your memories.

In lieu of flowers, Valton&#39;s family requests memorials be made...

Send flowers to the Burgin family.