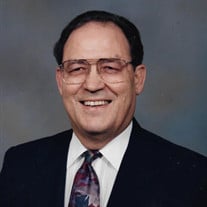 ***In lieu of flowers, memorials may be made to: Cambodia Christian Ministries 10550 Marsh Lane, Dallas, TX 75229 214-533-4266 www. cambodiaministries,org)*** Ronald Hugh Guess entered his eternal heavenly home on Thursday, April 8, 2021. Ronald was born in Temple, Texas on December 10, 1934 to Carl Boyd Sr. and Minnie Lee (Hamrick) Guess. He was the youngest of three children having an older brother, Carl and sister, Merle. Referred to as “Ronnie” by those who knew him from his years in Temple, he attended Temple High School where he played football, ran track, played intramural basketball, was a member of the gymnastics team, and sang in the Senior choir. Upon his high school graduation, he accepted a football scholarship from Baylor University where he played running back and punter. He graduated with a bachelor’s degree in business. On August 9, 1957, Ron married his high school sweetheart, Jan, at the Central Church of Christ in Temple and resided in Waco until Ron was offered a job with J.C. Penney in Lubbock where their daughter, Lynsey, was born. They resided there for about 3 years and attended the Sunset Church of Christ. They moved back to Temple shortly after where their son, John, was born. In 1967, they moved to Garland, Texas when Ron was hired as a pharmaceutical salesman for the UpJohn Company where he was employed for 30 years. He was also a member of Toastmasters. While in Garland, they attended the Saturn Road Church of Christ where he served as deacon and bible class teacher. Along with his wife, Jan, they worked in the bus ministry, visitation ministry, and sang for numerous weddings and funerals. He was a loving husband and father who always provided for his family, and supported his children in all their endeavors. He coached YMCA football for many years and served as president for a year for the Dallas Christian Booster Club. Ron loved to fish, play 42, and was an avid Dallas Cowboys fan. He was proceeded in death by his father, Carl Boyd Guess, Sr.; mother, Minnie Lee Guess; brother, Carl Boyd, Jr.; and sister, Merle Deane Barnes. He is survived by his wife, Janyce Kathryn Guess of Garland; and his 2 children, Lynsey Smith and her husband, Jim Smith, of Rowlett; and John Guess of Garland. Also surviving are 6 grandchildren and 2 great grandchildren. Nathan Smith and his wife, Caitlin, of Plano and their son, Oliver James Smith; Whitney Smith of Rowlett; Hayley Taylor and her husband, Demetrius Taylor, of Fate and their daughter, Jaelyn Elizabeth Taylor; Sarah Guess of Arlington; Rachel St. John and her husband, Daniel St. John, of Colorado Springs, CO; and Emily Guess of San Antonio and many nephews, nieces, and cousins. A celebration of life service for Ronald will be at 10:00am, Saturday, June 12, 2021 at Saturn Road Church of Christ in Garland, TX.

The family of Ronald Hugh Guess created this Life Tributes page to make it easy to share your memories.

***In lieu of flowers, memorials may be made to: Cambodia Christian...

Send flowers to the Guess family.