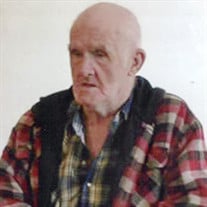 Roy Q. Byrd of Red Oak, Texas, 86, passed away on Sunday, February 28, 2021 in Waxahachie, Texas. Roy was born in Hallsville, Texas on June 10, 1934 to J. P. Byrd & Tessie L. Morris. He served in the Army as a soldier in the Korean War. Upon returning home he moved to the Dallas area where he met and married his wife Norma Jean Collins on May 4, 1957. They were married for 60 years before her passing in 2017. He eventually began his career as a roofer and continued that occupation until he retired in 2007. He was a hard-working man who had a way with dogs. He never met a dog he did not like or that did not like him. He was written up in local papers with his dog Shorty for training him to climb the ladder and sit with him all day on the roof. He is survived by his children: Patricia Hall of Flower Mound, TX; Pamela McGuire and her husband Donnie McGuire of Red Oak, TX; Roy Lynn Byrd of Flower Mound, TX and Donna Price and her Husband David Price of Dallas, TX; his brother Johnny Byrd & his wife Jeane Byrd of Kannapolis, North Carolina; 12 grandchildren; 27 Great-Grandchildren; 7 Great-Great Grandchildren; along with a host of extended family and friends. He was preceded in death by his wife Norma Byrd and her parents Connie & Mildred Collins; his parents J.P. & Tessie Byrd; his brothers Paul Byrd and Tommy Byrd; his sisters Mildred Shipwash & her husband Floyd Shipwash and Barbara Nelson & her husband Kent Nelson and his son-in-law Fred Hall. A Celebration of his life will be held on Monday, March 8, 2021 at 1:30 p.m. in the Chapel at Byrum Funeral Home located at 425 N. Dallas Ave in Lancaster, TX. Visitation with the family will be prior to the service at 11:30 a.m. the same day. Interment will be at Laurel Land Memorial Park located at 6300 S. R L Thornton Freeway in Dallas, TX at 3:00 p.m.

The family of Roy Q. Byrd created this Life Tributes page to make it easy to share your memories.

Send flowers to the Byrd family.