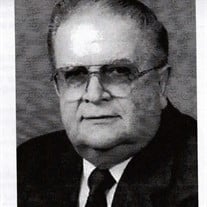 IN LIEU OF FLOWERS, the family requests that any memorial be sent to the Scottish Rite Hospital for Children, 2222 Welborn Street, Dallas, Texas 75219-3993. Senior judge of Dallas County Criminal Courts, Judge Ellis, passed away on October 23, 2018 in Dallas, Texas. Born on 25 Feb 1929, he was raised in Lancaster by his grandparents, Alma and Ben Ellis. He was educated in the Lancaster Public Schools, where he served as class president of the freshman, sophomore, junior, and senior classes and as captain of the Tiger football team. During World War II, at the age of 16, he enlisted in the Navy for 3 years, where he was trained as an Aerographers Mate. After graduating from weather school, he was assigned to a typhoon tracking squadron flying between Guam and Shanghai for 30 months. After being discharged, he enrolled in Southern Methodist University in 1949. He graduated from SMU Law School and was admitted to practice law in the state of Texas in 1954. He served his law school internship in the office of Charles Tessmer. Employment: City Attorney for Lancaster, Texas. Assistant District Attorney for Dallas County, under Henry Wade. Law office of Howard Law. Judge of Magistrate Court, Dallas County. Trial attorney for the US Dept of Labor. Elected offices Judge, City of Lancaster. Justice of the Peace, Precinct 5, Dallas County. Jude of the Dallas County Criminal Court for 28 years. Judge Ellis was a Certified Criminal Law Specialist for over 30 years and a member of the State Bar College. He was certified to appear before the: US District Court for the Northern Dist. Of Texas. 5th Circuit Court of Appeals. US Court of Military Appeals. United States Supreme Court. After 2 years training in Advanced ROTC at SMU, he received a commission as a 1st Lt. in the Judge Advocate General Corps. Later he transferred to the USAF Office of Special Investigation, where he served as reserve District Commander for Texas and Oklahoma. Judge Ellis retired as a Colonel, USAFR. Judge Ellis was a life member of the National Skeet Shooters Association, Amateur Trap Shooters Association, Dallas Gun Club, Ellis County Gun Club, and National Rifle Association. He was a member of the Lancaster Lions Club, with 57 years of perfect attendance, having served as president, zone chairman, and deputy District Governor. He was an amateur radio operator (call sign N5KKM) and was a member of the Dallas Amateur Radio Club, having served as secretary and director. He provided an opportunity for 3rd year law students, who were enrolled in the SMU criminal law clinic, to represent indigent defendants. They were always accompanied by SMU law professor Roark Reed or criminal law specialist Mike McCollum. This was at no expense to the county. Judge Ellis was a member of the First United Methodist Church for over 80 years. He had served as Chairman and member of the Official Board and as trustee. Ben Frank was preceded in death by his wife Christine Ellis. He is survived by wife Betty Ellis.

IN LIEU OF FLOWERS, the family requests that any memorial be sent to the Scottish Rite Hospital for Children, 2222 Welborn Street, Dallas, Texas 75219-3993. Senior judge of Dallas County Criminal Courts, Judge Ellis, passed away on October 23,... View Obituary & Service Information

The family of SENIOR JUDGE BEN FRANK ELLIS created this Life Tributes page to make it easy to share your memories.

IN LIEU OF FLOWERS, the family requests that any memorial be...

Send flowers to the ELLIS family.