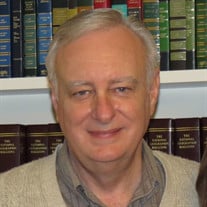 Terry Lee Bowman was born October 29, 1955 in Dallas, Texas and passed away December 30th, 2020 in Santo, Texas. He was a graduate of Lancaster High School, Hardin-Simmons University, Southwestern Theological Seminary, Luther Rice Seminary and Trinity Theological Seminary. Preceded in death by his parents, J.D. and Virginia Bowman and his brother, Reggie Bowman. Survived by his wife of 44 years, Lea Ann Bowman, his daughter Amy Dovel and her husband Matthew, and their son Bradley; his son Jonathan Bowman, his wife Jessica and their children Annalise and David; his daughter Ashley Williams and her husband Benjamin and their children Madilyn, Zachariah, Jackson, John Henry, and Mary James. His brother Rodney Bowman and wife Joan; his brother Ernie Bowman and wife Becky, Sister-in-law Darlene Bowman; Father-in-law Kenneth White; Brother-in-law John White, and many beloved nieces and nephews. Terry served in full time ministry for 46 years in various roles including recreation, youth, music, and evangelism. He served as a missionary to the Windward Islands and was a beloved pastor of churches in Magnolia, Giddings, Greenville, Wichita Falls, Lewisville, and Patillo, Texas. He served as a trustee on the boards of several university Baptist Student Ministries, Baptist Encampments, and Crisis Pregnancy Centers. He facilitated and taught at many conferences throughout the years, and was well known and respected for his leadership in local and State events. Terry had a heart for missions, evangelism and church growth and was heavily involved in planting new churches in the US and around the world. It is estimated that he was involved in the planting and growth of over 70 churches and missions in his years of ministry, many of which are thriving and growing still today. His led his churches in visionary giving per capita for the International Mission Board and the North American Mission Board throughout the years. His greatest love, other than his family, was to lead people to Jesus and minister to the people of his churches, his community, and the world. Celebration of life will be on Saturday, January 9, 2021 at 11:00 AM at First Baptist Church of Lancaster, Texas. Due to his love for international missions, Terry requested that in lieu of flowers, donations be brought to the Celebration of Life service for the International Mission Board of the Southern Baptist Convention. An ingathering of those donations will be received during the service. Checks should be made payable to Patillio Baptist Church, who will forward them to the IMB in Terry’s honor. Donations can also be mailed to Patillo Baptist Church, 4791 FM-2803, Lipan, TX 76462. Because of Covid-19 restrictions, masks are required to enter the church for the service. The family would love nothing more than to hug everyone in attendance, but they request social distancing at this time so as to keep them safe. Thank you for your cooperation and understanding.

The family of Terry Lee Bowman created this Life Tributes page to make it easy to share your memories.

Send flowers to the Bowman family.