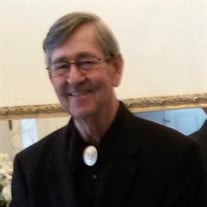 Per Toby’s request, his graveside service will be at the Dallas-Fort Worth National Cemetery. In lieu of flowers, the family requests that donations be made to the Wounded Warriors Project at https://support.woundedwarriorproject.org/ (The national cemetery allows minimal flower arrangements.) Homer “Toby” James Tyler, 76, of Waxahachie, Texas, died peacefully on April 7th in Ennis, Texas surrounded by loved ones. After battling dementia for several years, Toby (lovingly referred to as “Poppie” by his grandchildren) found peace and comfort in the arms of God and will never have to struggle to remember again. Toby was born on July 13, 1941, in Baton Rouge, Louisiana to Joyce and Percy Tyler. He grew up in the Baton Rouge area and joined the United States Air Force upon completing high school. After a long military career, he returned to Baton Rouge and worked for Exxon Refinery until he retired in 1996. Toby met his beloved wife Babs in 1987 and the two married in 1988. To be closer to their grandchildren, Toby and Babs moved to Waxahachie in 1996. Toby was a member of Christ the King Lutheran Church in Waxahachie, where he proudly served the Lord for over 20 years. Toby is survived by his wife of 30 years, Barbara “Babs” Tyler, of Waxahachie, Texas and his children and step-children Lori Masquat and David Tyler of Chandler, Oklahoma; Dawn Lambert of Gonzales, Louisiana; Katherenia Louque and Kathleen White of Waxahachie, Texas; Jeff Bond of St. Amant, Louisiana; and Johnny Bond, Jr of McMinnville, Tennessee, along with their spouses. He leaves behind numerous grandchildren in Texas, Oklahoma, Louisiana, and Tennessee. Toby was an inspiration and father figure for his son-in laws, Robin Louque and John White, both of Waxahachie, Texas. Toby was preceded in death by his parents, Percy and Joyce Tyler and his son Michael Tyler. Toby had many passions in his life, the greatest of which was being a grandfather. Full of wit and stories, Poppie never missed a beat when it came to his grandbabies. If anyone messed with one of “his babies,” he often responded with the question, “Do you want a fat lip or a knuckle sandwich?” and a big ol’ smile. He enjoyed feeding the less fortunate, woodworking, taking care of his several animals, watching the Dallas Cowboys, and keeping a pristine yard. He also enjoyed traveling around the world with Babs and their dogs. If anyone ever needed help, Toby was always glad to pitch in wherever he was needed. Dementia took control of his life several years ago, but he continued to show his love to his family members--even in his last moments. Poppie will be missed by many. Please sign the on-line guest book at http://www.byrumfuneralhome.com/ The Lord bless thee, and keep thee: The Lord make his face shine upon thee, and be gracious unto thee: The Lord lift up his countenance upon thee, and give thee peace. Numbers 6:24-26

Per Toby&#8217;s request, his graveside service will be at the Dallas-Fort Worth National Cemetery. In lieu of flowers, the family requests that donations be made to the Wounded Warriors Project at https://support.woundedwarriorproject.org/... View Obituary & Service Information

The family of "Toby" Homer James Tyler created this Life Tributes page to make it easy to share your memories.

Per Toby’s request, his graveside service will be at the Dallas-Fort...

Send flowers to the Tyler family.