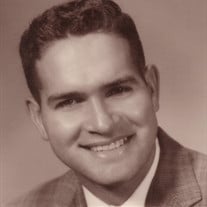 In lieu of flowers, memorials may be made to the Center For BrainHealth, 2200 West Mockingbird Lane, Dallas, Texas 75235. Welton Ott “W.O.” Adams of Lancaster, Texas was born June 26, 1930 in Stephens County, Texas to Walter James and Mary Annie “Dempsey” Adams. He passed from this life on November 28, 2017. He was preceded in death by parents; sister Clara Mae Cox. W.O. is survived by wife Sheri (Winstead) Adams; son David Adams & wife Kelly; daughter Dee Ann Adams; grandchildren Seth Adams & wife Jennifer; Amber Buehler & husband Brian; great grandchild Breelyn Rae Buehler; brothers Carlton Adams, Clinton Adams; sister Lillian Adams. W.O. grew up in the country outside of Ranger, TX where he and his family farmed and ranched. He graduated from Ranger High School in 1946. After graduation he bought his own truck and combine and traveled the country harvesting grain until he entered the Air Force. He served as Airman First Class, Regular Air Force during the Korean War from December 29, 1950 to March 17, 1954. He was a member of the 6580th Missile Test Squadron and was stationed during this time in New Mexico, Florida, and Mississippi. While in the military he worked on a guided system for some of the first guided missiles ever made in the country. He also was among the first to launch missiles from Cape Canaveral prior to it being used for space exploration. After serving his country he started his working career. While working for LTV he wanted to see if he could make it in college so he enrolled in engineering night classes at UTA. After taking his night classes and succeeding he moved to Lubbock to start school at Texas Tech. He married Sheri Winsted and she starting working in the President’s office while he attended school. He received his Bachelor of Science in Electrical Engineering from Texas Tech University in 1959. After graduation he moved with his family to Denver, CO and worked at a missile site for General Electric. After a few years at this job he decided office work was not his ideal job so he moved back to Dallas and went to work for JC Boney Construction pouring concrete. This led him to open up W.O. Adams Construction on June 19th 1972. He started off the company with concrete and dirt work and in the early 80’s he expanded the business to include building athletic fields. Some of his notable fields include the Texas Rangers, New Orleans Saints practice facility, New Orleans Zephers, Round Rock Express, Corpus Christi Hooks Minor League Stadiums, the Cotton Bowl along with numerous high schools and universities including Texas Christian University, Baylor University and the University of Texas. He was active in WO Adams Construction until 2005. Besides working he loved spending time with his family. He always spoke of the special experiences he shared with his nieces and nephews. He also loved attending all of Seth and Amber’s sporting events and taking them hunting and fishing. He was diagnosed with frontal lobe dementia in 2004 and fought the disease for the past 15 years and although his memory faded with the disease the many memories made over the years will live on. He was many things throughout his life including developer, engineer, business-owner, entrepreneur, fisherman, hunter, cook, jokester, and most importantly he was an uncle, brother, husband, dad, pop and friend to many.

The family of Welton Ott "W.O." Adams created this Life Tributes page to make it easy to share your memories.

In lieu of flowers, memorials may be made to the Center For BrainHealth,...

Send flowers to the Adams family.