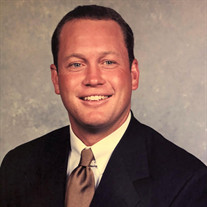 William Scott “Bobby” Tucker was born November 29, 1972 in Dallas, TX to Maurice Monroe and Judith Sharon (Mosley) Tucker and passed from this life on December 27, 2019 in Plano, TX. Scott grew up in Lancaster and was a graduating member of the LHS Class of ’91. After high school, he went on to graduate from Southwest Texas State University in 1995 with a Bachelor’s Degree. Scott loved sports of all kinds and played most of them, but of them all, golf was his love. He shot a hole in one at Stephen’s Park on September 14, 1988 as a sophomore in high school. Scott became a golf pro at several different courses in the area, attended the Master’s Golf Tournament several times, and was a member of The PGA of America. He was preceded in death by his father, Maurice; his uncle, Bill Mosley; and all of his grandparents. Scott is survived by his daughters, Adelaide Tucker, Lauren Tucker, and Katherine Tucker; his mother, Judy Tucker; his sister, Michelle Aquino and husband Frederick; his nephew, David Aquino; his niece, Elizabeth Aquino; his aunt, Mary Tucker Joplin; the mother of his girls, Holly Tucker; and numerous close cousins and friends. Visitation will be from 6:00pm to 8:00pm, Monday, December 30, 2019 at Byrum Funeral Home. Funeral service will be at 10:00am, Tuesday, December 31, 2019 at Byrum Funeral Home with interment at Edgewood Cemetery in Lancaster followed by a Celebration of Scott's life at 1:00pm at St. Andrew UMC in Plano, TX. Scott was a huge supporter of Junior Golf through the NTPGA's Foundation, volunteering his time and working junior events, after school programming, college scholarship interviews and also summer camps. In lieu of flowers, please consider making a donation to the Northern Texas PGA Foundation's junior golf growth of the game initiatives by clicking HERE. Under the Reason for Donation, please click "other" and denote in memory of Scott Tucker, PGA.

William Scott &#8220;Bobby&#8221; Tucker was born November 29, 1972 in Dallas, TX to Maurice Monroe and Judith Sharon (Mosley) Tucker and passed from this life on December 27, 2019 in Plano, TX. Scott grew up in Lancaster and was a graduating... View Obituary & Service Information

The family of William Scott "Bobby" Tucker created this Life Tributes page to make it easy to share your memories.

Send flowers to the Tucker family.